Hudbay expected to start mining the Pampacancha satellite deposit in late 2020, but restrictions imposed to fight the coronavirus pandemic limited the government’s ability to consult with a local indigenous community, Kukielski said in February.

.......
He also said Hudbay is aggressively advancing development of the Pampacancha deposit, and is expected to be in production early in 2021.

“It utilizes Constancia’s infrastructure and when it is in full production we expect to produce over 100,000 tonnes of copper from our Peru business,” he said.

Opponents of Northern Dynasty Minerals’ (TSX: NDM) proposed Pebble copper-gold-molybdenum mine in Alaska found a new ally on Tuesday, as US President’s son Donald Jr. took to Twitter to oppose the project supported by his father’s administration.

Trump Jr. said he “100%” agreed with Vice President Mike Pence’s former chief of staff, Nick Ayers, in opposing the mine.

“The headwaters of Bristol Bay and the surrounding fishery are too unique and fragile to take any chances with,” the President’s first-born son tweeted.

His comments come less than two weeks after Northern Dynasty secured a final environmental impact review from the Army Corps of Engineers for the mine.
.......
The Bristol Bay area, where the mine would be located, is the world’s largest commercial sockeye salmon-producing region. Opponents of the project have long feared its discharges could contaminate local waters, causing irreparable damage to the aquatic habitat.
........

Alaska mine developer Northern Dynasty has announced the results of an updated mineral resource estimate for its Pebble copper, gold and molybdenum deposit in the Bristol Bay region in south-west Alaska, US.

Covering a large area on the state-owned land designated as a potential site for mineral exploration and development, the Pebble deposit is a greenfield project.

The project is being developed by the Pebble Partnership, a subsidiary of Northern Dynasty.

Studies of the mineral resources at Pebble confirmed that the deposit also comprises quantities of Rhenium.
Rhenium is a metal that has uses in the defence sector, making it a critical material for the US. The metal is used in jet engines and other military applications. It is also used for producing high-octane fuels.

Northern Dynasty president and CEO Ron Thiessen said: “Certainly the US military has identified Rhenium as a critical mineral, and one the United States must develop additional domestic production of in order to enhance its military security.

“The development of Alaska’s Pebble Project would clearly go a long way toward filling that gap, while also addressing substantial US domestic supply deficits for other critical minerals – notably copper and silver.”

The Pebble deposit will not only be able to produce base and precious metals, but also a critical mineral required by the US for securing military dominance.

Earlier this week, Northern Dynasty revealed that the Alaska Republican Party officially passed a resolution in support of the responsible development of the Pebble mine.

The mine has been controversial since it was first proposed. In July last year, Northern Dynasty announced that the US Environmental Protection Agency (EPA) withdrew its proposed restrictions on mining operations in Bristol Bay.

This move came after the agency reconsidered an Obama-era decision that suspended development on the deposit citing concerns it could harm Alaska’s salmon fishing industry.


......
Given that total rhenium resources in the US are currently estimated at 5 million kg, Pebble’s total endowment would represent an 84% increase to the nation’s known rhenium resource base.

According to the USGS, about 8,400 kg of rhenium was produced across six domestic operations last year, and the US imported an additional 39,000 kg of the metal, which is often recovered as a byproduct through treatment of molybdenum concentrates at mines developed on porphyry copper deposits like Pebble.

As a significant deposit of rhenium on US soil, development of the Pebble resource will materially advance the nation’s goal of achieving self-sufficiency in the critical minerals needed to support and sustain its economic growth, military security, manufacturing industries and transition to a lower carbon future, Northern Dynasty said.


Paving the way in Botswana for Khoemacau copper project 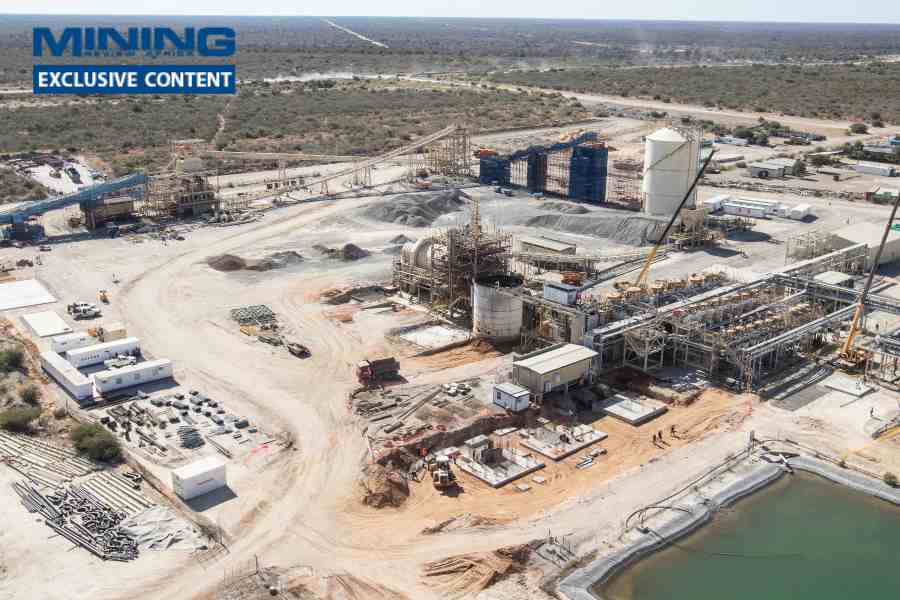 The Khoemacau copper project, located in the central Kalahari copper belt some 65 km south-west of Maun, is developing underground operations at its flagship Zone 5 deposit. The mine plan involves three adjacent underground mines at Zone 5, each producing over 1.2 Mtpa in their first five years of production. 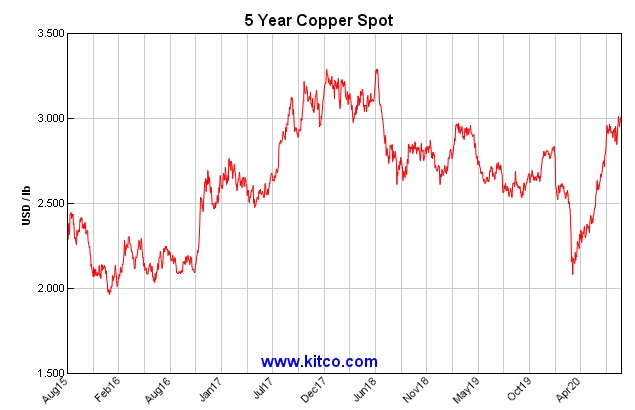 Grasberg mine in Indonesia (Credit: Freeport)

Freeport Indonesia expects its annual copper and gold sales to jump next year as it transitions to operating in its underground mine, CEO Tony Wenas told a virtual conference on Friday.

Freeport Indonesia expects this year’s copper and gold sales to be lower than usual at 0.77 billion lbs and 0.82 million ounces respectively.

When it transitions to an underground mine, however, sales of copper in 2021 are expected to jump to 1.4 billion lbs while gold sales are expected to increase to 1.4 million ounces, Wenas said.

Freeport Indonesia, operator of Grasberg, the world’s second-biggest copper mine, is on track shift to all-underground mining by 2022.

Phoenix-based Freeport McMoRan’s (NYSE:FCX) iconic Grasberg mine in the Papua province of Indonesia will become an entirely underground operation in a little over a year – nearly doubling copper and gold output in the process.

Freeport Indonesia (PT-FI) expects this year’s copper and gold sales to be lower than usual at 0.77 billion pounds (350kt) and 820,000 ounces, CEO Tony Wenas told investors last week, but said that figure will jump to 1.4 billion pounds (635kt) and 1.4 million ounces next year.

Freeport CEO Richard Adkerson pointed out during the company’s Q2 conference call that at full production, Grasberg is the globe’s largest gold mine, even though the gold is a byproduct:

“The high grades of copper combined with this gold component make Grasberg one of the mining industry’s truly most valuable fabulous assets in its history.

“As gold prices approximate $1,800 an ounce, revenues from gold are projected to completely offset the total cost of production at Grasberg.”

With gold predicted to scale $2,000 again (futures advanced to $1,975 on Thursday) in the not too distant future and silver credits at the mine also growing nicely, Adkerson’s praise of Grasberg may turn out not to be all that fulsome.

Copper’s 50% rally since March to top $3.00 a pound coupled with gold’s record-breaking run has seen Freeport’s stock triple in just six months for a market value of $23.4 billion.

Plenty P&P
Mined since the 1967 by Freeport, during its heyday in the early 2000s the complex located in the remote Sudiman mountains, hit peak production of 3.5 million ounces of gold and 1.9 billion pounds of copper (861kt).

Discovered in 1938 by a Dutch geologist, the Ertsberg (ore mountain) skarn and porphyry systems are still being exploited today as part of the DMLZ underground mine and are expected to produce through 2041.

Grasberg’s proven and probable reserves estimate at its four producing mines and one undeveloped mine at end-2019 was pegged at 46.4 million ounces of gold, 18.9 million tonnes of copper, and 291 million ounces of silver.

At ruling prices, the in-situ value of the contained metals tallies up to $228 billion, second only to Escondida in Chile.

After years of wrangling, majority ownership of Grasberg was transferred to the Indonesian government at the end of 2018, reducing Freeport’s stake to just shy of 49%.

Under the deal, Freeport’s economic interest in its Indonesian operations is pegged at 81.3% through 2022. Mining rights are extended to 2041, subject to Freeport building a new smelter in the Asian nation.

Phase one of three, Kakula, could be up and running in less than a year and according to the definitive feasibility study, (DFS) will average 284,000 tonnes of copper per year for the first 10 years, processing 6.2% Cu ore at a pedestrian pace of only 6 million tonnes per annum.

The expanded Kamoa-Kakula will have a run rate of just over half a million tonnes copper in the first decade at 5.1% Cu grade and at peak production returns 805,000 tonnes of copper per year, processing 19 million tonnes of ore per year at an eye-watering 7% Cu grade. 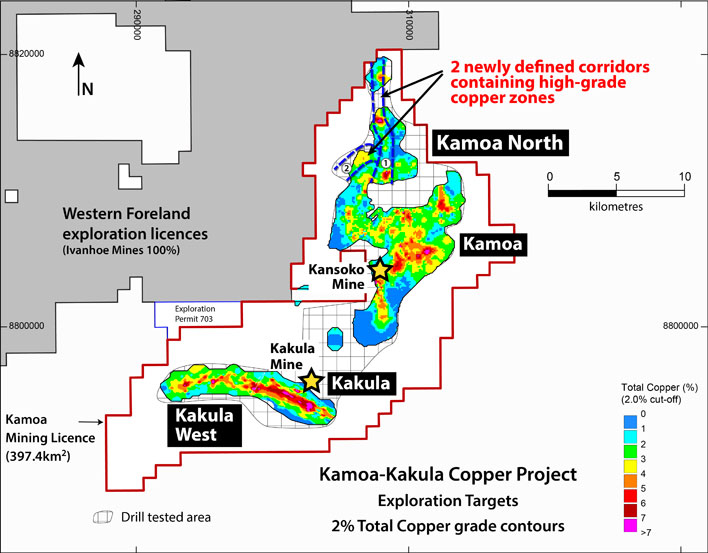 Taseko Mines’ Florence copper project in Arizona received strong support at a public hearing held by the Arizona Department of Environmental Quality (ADEQ), which is part of the process required to obtain an Aquifer Protection permit (APP), the company has announced.

According to Russell Hallbauer, Taseko’s CEO and director, “30 interested parties spoke at the hearing, communicating great support for the company and the project, with only one individual not in favour. The ADEQ heard loud and clear that the community wants this project to advance to commercial production.”

Hallbauer added that Taseko has worked to inform the community about the safeguards in place at Florence and about the environmental benefits of the in-situ copper extraction process, done using a water-based solution, proposed for the project.

“The extensive data collected from 18 months of operating the test facility is proof that the process works, both from a technical perspective as well as environmentally.”

The ADEQ will continue to take written submissions for three weeks, until Oct. 12, before a final permit is written and issued.

Taseko envisions a two-phase development for the wholly owned Florence copper project, located midway between Tucson and Phoenix. The first production test facility, with 24 wells and a solvent extraction and electrowinning plant, has been operating since December 2018, to generate copper cathode. A commercial-scale facility would follow, with the permitting process aimed at transitioning the project into the second phase – this would include an expanded wellfield and plant.

According to a third-party technical report from 2019, the Florence copper commercial facility would produce an average of 85 million lb. of copper annually at a cost of $1.13 per lb. over a 20-year life.

In addition to the Aquifer Protection permit, Taseko is working towards an Underground Injection Control permit for Florence from the Environmental Protection Agency. The company expects to have the final permits in hand by early 2021.