Reuters reported that a pipeline connecting western Myanmar to China is ready to carry gas from July, but it won't be fully operational for about three more months due to construction delays in China.

Myanmar's energy minister said that the multibillion-dollar pipeline stretches 870 km (540 miles) from the Indian Ocean to the Chinese border and will deliver oil and gas to energy thirsty western China and generate much needed revenue for Myanmar's new reformist government.

Mr Than Htay in an interview in the capital said that "The pipeline construction inside Myanmar is 100 percent finished. But the China portion that is over 1,600 km (990 miles) long, they are not able to finish in time.”

Despite the delay, gas will begin flowing in the $2 billion pipeline from July but it will be used domestically until construction in China is completed, he told Reuters. He said that "For Myanmar's domestic utilisation, we can take (gas) starting from July.”

He added that a parallel USD 2.3 billion 770 km oil pipeline would be completed in September.

China National Petroleum Corp the country's top oil and gas producer, owns the pipelines, which will channel natural gas from the Shwe fields off the coast of Western Rakhine State along with oil originating from the Middle East and Africa.


Letpadaung Copper Mine to Resume Operations

The controversial Letpadaung copper mine is set to resume operations, a union minister said on Thursday, following the signing of a new contract that gives the government a large share of the mine’s profits.

Hla Tun, a union minister from the President’s Office who chairs the Letpadaung mining project implementation committee, said 1,300 employees would soon return to work at the mine in northwest Burma’s Sagaing Division.

“The mining project will start in the next two months,” he told reporters at a press conference in Naypyidaw, adding that the project would be a model for other foreign companies seeking to invest in the country.

Burma’s government and the Chinese-backed Wanbao Mining Ltd signed a new contract this week with amendments to the former contract, which was signed during the previous military regime.

Operations at the mine have been suspended since November, following a brutal police crackdown on peaceful protesters who opposed the project’s environmental and social impact on local communities. The crackdown left dozens of people injured and prompted the government to set up a parliamentary committee to investigate the project’s viability.

Wanbao pledged in the new contract to meet international environmental standards and to give jobs to local people, while also investing in education, health care and community development.

“Our project will benefit the community,” Geng Yi, manager of Myanmar Wanbao Mining Copper Ltd, told reporters. “People in the community will see improvements in education and health care.”

“All pagodas at the mining site need to be relocated because it is not suitable to keep them in the mining area,” he said. “We have already talked to other senior monks about this.”

The new contract was signed on Wednesday by the government and Wanbao without prior consultation with the public.

“In the past there were problems because they signed the contract without informing the public,” said Khin San Hlaing, a lawmaker and member of the parliamentary committee tasked with investigating the mining project after the crackdown. “Now they have done it again, failing to inform the public.”

“I only learned about this a day ago when they came to explain in Parliament,” she added. “Even then, they did not explain the details.” Protesters hold banners as they march against the Letpadaung copper mining plan in Yangon, Myanmar, on November 26. The project has aroused controversy for months over allegations of corruption. Photo: AFP
http://www.globaltimes.cn/content/746784.shtml


....Than Naing, a 40-year-old local worker on the project, told the Global Times he was pleased with the current job with a salary of $230, and is expecting a raise once the project goes into operation. The company is promising to provide more training opportunities.....

The project, jointly developed by China's State-owned enterprise Wanbao Mining Ltd and its partner, the Union of Myanmar Economic Holdings Ltd (UMEHL), has come under fire over the past few months.

YANGON, March 26 (Reuters) - International oil majors including Royal Dutch Shell, Statoil, ConocoPhillips and Total won rights to explore for oil and gas off Myanmar, according to the Southeast Asian country's Ministry of Energy.

Myanmar has awarded 10 shallow-water blocks and 10 deepwater blocks in an auction process that began in April last year, according to a posting on the ministry's website on Wednesday.

Winners of deepwater blocks will be able to explore and operate the blocks on their own, while shallow-water winners will need to work with a registered local partner, according to the terms of the production sharing contracts.

Myanmar's oil and gas sector attracts the largest share of foreign investment, accounting for $13.6 billion, or 40 percent, of total accumulated foreign investment through September, according to the Central Statistical Organisation (CSO).

Myanmar exported $3.7 billion worth of gas in the fiscal year to March 31, 2013, mostly to neighbouring Thailand, up from $3.5 billion the year before.

The country's proven natural gas reserves totalled 7.8 trillion cubic feet (tcf) at the end of 2012, according to BP's Statistical Review of World Energy.

A total of 160 local companies have registered with the Ministry of Energy as potential partners for winners of the shallow-water blocks, but industry sources say only a few of them have any oil and gas experience.

Contracts winners will have to complete environmental and social impact assessments and submit reports to the Investment Commission before starting operation.

Italy's Eni, following its participation in the competitive International Bid Round launched by the Republic of the Union of Myanmar, signed in Nay Pyi Taw in presence of the Country’s Energy Ministry, two Production Sharing Contracts (PSC) for RSF-5 and PSC-K onshore blocks in Myanmar.

The Joint Venture is between Eni, the Operator with a 90 percent participating interest through Eni Myanmar B.V, and the Myanmar Production and Exploration Company Ltd (10 percent).

The exploration period will last 6 years, subdivided in 3 phases.

This agreement marks Eni’s first entry into Myanmar, a rapid expanding economy, and confirms its strategy to reinforce its presence in the South East Asia region, where Eni is already present in China, Vietnam, Indonesia and Timor Leste.

Myanmar has mapped a 15-year power development plan to meet increasing demand, setting its sights on boosting capacity from 4,581 megawatts to over 29,000MW in 2031.

According to Myint Oo, director at the Ministry of Electric Power, the plan will shift Myanmar’s focus from hydropower to other energy sources, including coal, natural gas, solar, and wind power. In 2031, Myanmar is set to have 41 power plants. Besides the capacity boost, the authorities are also focusing on reducing transmission and distribution loss on its antiquated national grid.

“We have planned to implement many power projects exploiting available resources in Myanmar to fulfil surging power demand in the near future,” the official said.

As of September 2014, from 814 power plants across the country, the total generation capacity was 4,581MW, of which 3,044MW (66.46 per cent) was from hydropower. High reliance on hydropower causes unstable supply, as the reservoirs behind dams shrink during the hot season.

As of September 17, with 33 per cent of the population having access to electricity, the peak load was 2,171MW and per-capita consumption was 232 kilowatt hour. 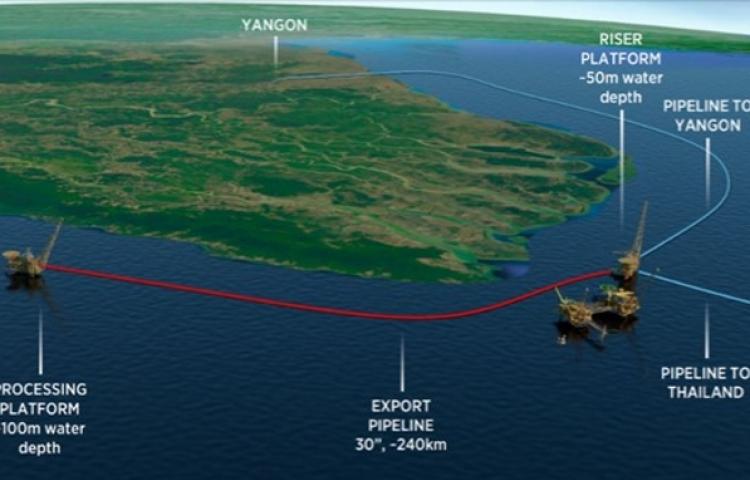 Myanmar’s Ministry of Electricity and Energy (MOEE) has issued an invitation for PV developers to submit prequalifying bids for the construction of several solar plants throughout the country, with a combined capacity of 1 GW.

The document, which was published on the MOEE’s Facebook page, states that the selected independent power producers will be awarded 20-year power purchase agreements. Overall, 30 solar facilities with capacities ranging from 30 MW to 40 MW are expected to be built through the tender.

Prospective developers will have until June 18 to submit their proposals.

According to the latest statistics from the International Renewable Energy Agency, Myanmar had cumulatively installed 88 MW of PV capacity by the end of 2019. Most of that capacity came from a 50 MW solar plant that was completed last July.

Off-grid solar already plays a key role in Myanmar’s electrification strategy. A number of rooftop PV arrays and minigrid projects having already been developed in rural parts of the country. However, the utility-scale solar segment has also started to take off.