For countries who have complete control over their oil industry through their state-run oil behemoths, it’s easy to order them to increase oil output—costs be damned. But sinking money into oil and aging oil fields or in new and cost-intensive plays comes with risks, and in China’s case, investors aren’t so sure that its onslaught of capex planned over the next five years is a winning bet.

Still, China’s largest state-run oil majors, China Petroleum & Chemical (SINOPEC), China National Petroleum Corporation (CNPC), and China National Offshore Oil Corporation (CNOOC) have plans to shell out billions for what some see as rather unprofitable oil fields for the sake of shoring up the state’s energy security in direct response to President Xi’s call last year for them to increase oil production.

The billions in capex planned for the next five years from China’s three companies that together operate over 90 percent of China’s oil-producing fields are not insignificant and represent a huge increase from spending in recent years. Sinopec, for one, announced only days ago that it will spend US$20.3 billion in 2019 alone—US$8.9 billion of which will be dedicated to just upstream operations. This upstream capex represents more than a 40 percent increase in spending over 2018, and will be used in part to increase production at its aging Shengli oilfield, whose reserves fell to just 16 million barrels by end 2018 vs 49 million barrels the year prior, according to Reuters.

Sinopec’s dilemma is clear. Its net profit plunged in 2018 as its costs for purchasing crude oil rose over 40 percent as oil prices ticked upward. It is being squeezed by the rising cost of oil, and it has plans to refine even more crude in 2019, making it even more desperate to lower the amount of crude oil it must purchase by pumping more oil at home.

CNOOC, too, has major plans to up its capex, to the highest level since 2014. In January, it announced that it would lift capex to between US$10 billion and almost US$12 billion this year, and announced even bigger plans to double the number of exploration projects and proven oil and gas reserves by 2025.

CNPC—China’s largest oil and gas supplier, last year promised to spend US$22 billion by 2020 to boost oil production as its production in old and dying fields peters out. CNPC is hoping this spend will increase production by 75 percent. To this end, CNPC plans on enlisting the help of foreign firms as well in order to capitalize on others’ technology that it lacks, according to a South China Morning Post article from earlier this month.

The mad scramble by China’s big three to make large investments comes in response to President Xi’s directive last July to increase production as its thirst for oil continues to be robust. Its own oil production, too, is on the decline, leaving it in a predicament of potentially catastrophic proportions that are only exacerbated by the trade row that is endlessly dragging on with the United States

But producing oil and producing oil at a profit are two entirely different things. The reality is that China’s oilfields are aging, and getting oil out of the ground will be costly. According to data crunched by Bloomberg earlier this week, China’s oil reserves have been on a steady and “terminal” decline, with producing falling about 12 percent over the last three years.

While China’s hopeful increase in production may indeed offset production declines in its older oil fields, it is unlikely to be sufficient enough to also decrease its appetite for crude oil imports, which serviced a whopping 70 percent of its crude oil needs in 2018.

By Julianne Geiger for Oilprice.com

Oil supermajor Shell has signed an agreement with China’s Sinopec to jointly study the potential development of shale oil in eastern China—one of the few international majors venturing into the potentially vast but underexplored and underdeveloped Chinese shale oil resources.

Shell and Sinopec will jointly study the potential of the Dongying trough in the eastern Chinese province of Shandong, Reuters reports, citing a brief statement from the Chinese company.

Shell operates in shale oil and gas projects in North and South America, including in the Permian and in the Appalachia basin, in Alberta and British Columbia in Canada, and in Argentina’s Vaca Muerta shale basin.

China, for its part, aims to develop its unconventional resources as its appetite for crude oil and natural gas continues to rise, while current domestic production can’t meet growing demand.

Earlier this year, China said that it had found massive shale oil reserves in its northern Tianjin municipality.

A PetroChina test oil well at a shale field in western China could finally mean a strong commercial potential for shale oil for the first time in the world’s top crude importer, Morgan Stanley said in February this year.

The shale boom in China, however, would be just a fraction of the U.S. shale revolution—Morgan Stanley expects Chinese shale oil production could be at 100,000 bpd-200,000 bpd by 2025, which is nothing compared to the millions of barrels of oil pumped in the United States every day.

According to an official at the Chinese Ministry of Natural Resources, quoted by Reuters this week, shale oil in China has very low permeability, meaning that production per well would be very low and the economics for production might not work.

By Tsvetana Paraskova for Oilprice.com 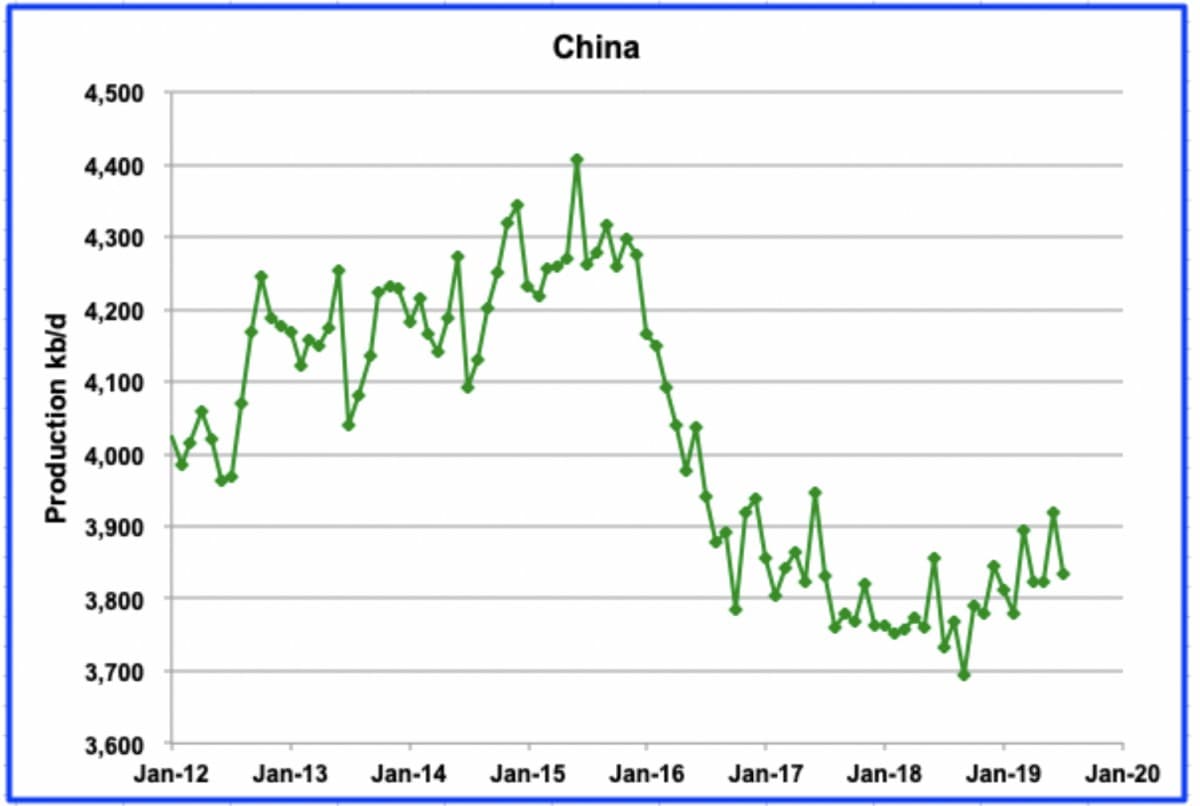 China National Petroleum Corporation (CNPC) has found crude oil and natural gas in the deepest well drilled in Asia’s onshore, striking hydrocarbons in a pre-salt layer for the first time in China.

The discovery was made in the Tarim oilfield in China’s northwestern region of Xinjiang in a well deep 8,882 meters (29,140 feet), which was first drilled in July last year.

Production from the now spudded well in the pre-salt area is expected at 133.46 cubic meters of oil per day, while daily gas production is seen at 48,700 cubic meters, according to a CNPC statement carried by Reuters.

It is rare for new wells to be so deep, as the oil and gas wells in China typically range from 200 meters (656 feet) to 5,000 meters (16,404 feet), a petroleum engineer told the Global Times, commenting on the deepest onshore well in Asia.

CNPC and China are touting the deepest well in Asia as a success in enhanced oil recovery and risk exploration, but the world’s largest oil importer could face geological challenges in replacing oil and gas reserves from maturing oil and gas fields, analysts say.


China Doubles Rate Of Crude Stockpiling As Oil Falls Below $0

China doubled the fill rate at its strategic and commercial inventories in Q1 2020, taking advantage of the low oil prices and somewhat supporting the oil market amid crashing demand by diverting more imports to storage, rather than outright slashing crude imports.

According to estimates from Reuters columnist Clyde Russell based on official Chinese data, between January and March, nearly 2 million bpd of oil imports were not processed by refiners. To compare, the estimates for Q1 2019 show that out of the total Chinese crude oil availability—including imports and domestic oil production – just 1.07 million bpd were held back and not processed by refiners. The difference between the Q1 2020 and the Q1 2019 unprocessed crude suggests that this year China has doubled the rate at which it has been filling its strategic and commercial inventories, Russell argues.

China doesn’t report inventories, so the rate at which it fills stockpiles is almost always a game of guestimates. This year so far, despite the COVID-19 pandemic that resulted in a Chinese demand slump first, China hasn’t dramatically cut its imports, according to official customs data. Oil imports have been lower than recent record-breaking levels, but not as dramatically as they would have been if China hadn’t diverted a higher volume of oil imports into storage.

Emerging from the coronavirus lockdown, China’s oil refiners are buying ultra-cheap spot cargoes from Alaska, Canada, and Brazil, taking advantage of the deep discounts at which many crude grades are being offered to China with non-existent demand elsewhere.

In March, China’s crude oil imports rose by 4.5 percent on the year, but dropped compared to January-February. However, independent refiners began ramping up bookings for crude arrivals in March and April as early as at the end of February.

But China’s stockpiling alone cannot save the oil market right now, with prices plunging again at the start of the week amid colossal demand losses and shrinking storage around the world and in the U.S.

The listed arm of China National Offshore Oil Corporation (CNOOC) said on Monday that it had made a significant discovery of oil and natural gas in the eastern part of the South China Sea.

A discovery well at the Huizhou 26-6 discovery in the Pearl River Mouth Basin in the Eastern South China Sea was tested to produce around 2,020 barrels of oil and 15.36 million cubic feet of gas per day.