The country's first pilot offshore wind farm was constructed in 2008. The Shanghai East Sea Bridge Offshore Wind Farm has a total installed capacity of 100MW, comprising 34 sets of 3MW turbines from Sinovel, the country's largest wind turbine producer. It will go into operation before the inauguration of the World Expo Shanghai, which is scheduled for May 1, 2010.

China National Offshore Oil Corporation (CNOOC) is beginning construction this year of an offshore wind farm in Weihai, east China's Shandong Province, which is scheduled to produce 1.1GW in 10 years. The first stage will have 30 sets of 1.5MW turbines producing 45 MW.

Other leading Chinese power businesses, such as China Power Investment Corporation, Longyuan Electric and Huaneng New Energy, have also been attracted to the promising offshore wind power sector. They have begun to study offshore wind farms in Dafeng and Rudong of east China's Jiangsu Province and Roncheng of east China's Shandong Province.

Chinese wind turbine manufacturers are investing heavily to grab a share of the market.

In January this year, Sinovel started construction of a 5MW offshore turbine production base in Yancheng, Jiangsu Province. Han said Sinovel had finished designing the 5MW turbines and would produce the first sample turbine at the end of the year.

Goldwind, China's second largest wind turbine producer, is expected to complete construction of a production base for offshore turbines in Dafeng, Jiangsu Province, in October. In three to five years, the base will have an annual capacity of 800 to 1,000 sets of turbines. 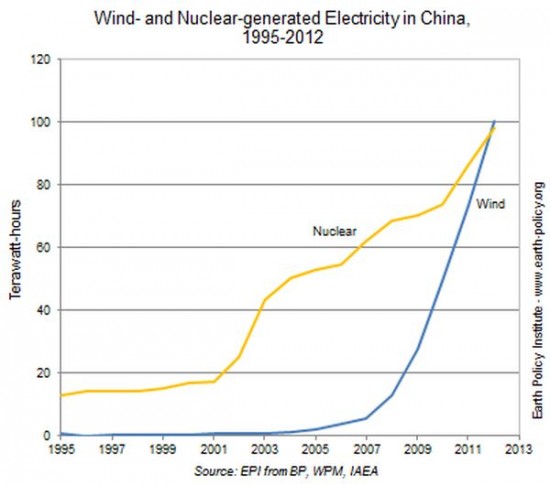 Major wind farm developer Longyuan Power said Thursday that it has completed installing five wind turbines on a wind farm located about 4,900 meters above sea level in Tibet, making the farm the highest in the world.
The company plans to install 33 wind turbines on the farm, which is located in Naqu Prefecture in southwest China’s Tibet Autonomous Region.

With 28 more turbines to go, the farm is scheduled to be connected to the grid at the end of the year.

The wind turbines are supplied by Guodian United Power.

Tibet is rich in clean energy resources, including wind power, but its high altitude means the turbines will need to deal with low temperatures, low air density and high wind speeds.


The five turbines of the first phase have a capacity of 7.5 megawatts, an official said on Tuesday. The completed project will have 33 wind turbines capable of putting out 49.5 megawatts.

Deng Changlin, of the Tibet energy administration office, said Tibet is a very windy place which receives a lot of sunlight. Developing new, green energy sources will play a big part in protection of the frail ecosystem of the region.

Findings at the recently concluded National Energy Working Conference 2014 revealed that the country is on track to approve 14 GW of wind power projects (60 per cent of which will be distributed projects).

In addition, the country aims to bring the price for wind and solar power in alignment with that for thermal power by 2020.

Although some reports indicated that the wind power sector in China showed minimal growth in 2013, the actual situation was not so grim. Recently released statistics pointed to a recovery in the industry, with newly installed capacity rising 24 per cent year on year, the bid invitation price rising nearly 15 per cent, and the average year-on-year annual wind farm utilisation time increasing by more than 100 hours. 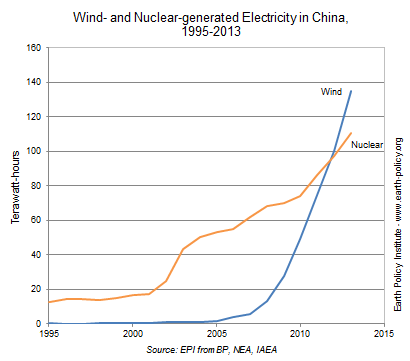 China connected an additional 9.16 gigawatts (GW) of wind power to its grid in the first half of 2015, according to figures published by China’s top energy regulator on Monday, raising the total by 9.5 percent compared to the end of last year.


The wind farm on Nanri Island, Putian city, is designed with an installed capacity of 400,000 kW. Upon completion in 2018, the project will be able to yield 1.4 billion kilowatt hours of electricity a year, equivalent to burning 450,000 tons of coal, while saving 4.4 million tons of water otherwise used for thermal power generation.

Wind power has provided stable electricity supply to more than 50,000 people living on the island since 2005. The island is prone to hurricanes and typhoons, with about 320 days of windy weather on average per year.

Promoting non-fossil energy including wind power, China is in the middle of an energy revolution to power its economy in a cleaner and sustainable manner. The government aims to lift the proportion of non-fossil fuels in energy consumption to 20 percent by 2030 from present around 11 percent.