Asian LNG prices will likely be at their lowest, seasonally, in a decade by the end of the year as rapidly rising production outstrips feeble demand, weighed down by a global economic slowdown and the U.S.-China trade war, traders said.

Most trade sources in a Reuters survey forecast spot Asian liquefied natural gas for December delivery to go no higher than $6 per million British thermal units, which would be the lowest for that month since Refinitiv began collecting such data in 2010.


India to lead the world in newbuild LNG regasification capacity

India is expected to lead with 18% capacity share in the global LNG regasification industry from newbuild (planned and announced) projects between 2019 and 2023, according to GlobalData.

Adithya Rekha, Oil and Gas Analyst at GlobalData, explains: “Among the upcoming regasification terminals in India, Karwar Floating has the highest capacity of 365 billion ft3. This planned offshore terminal is expected to start operations in the Karnataka state by 2020.” 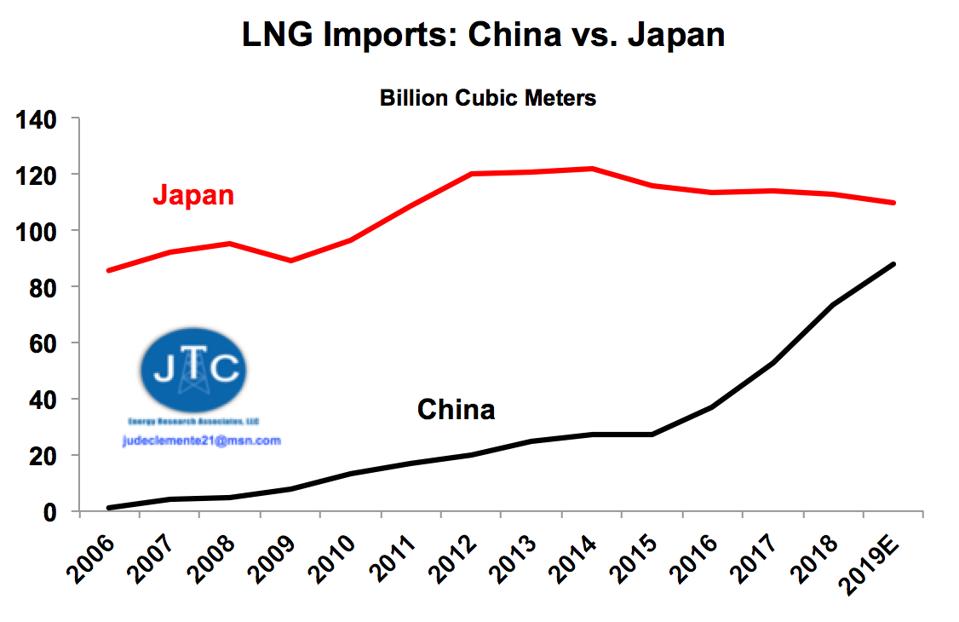 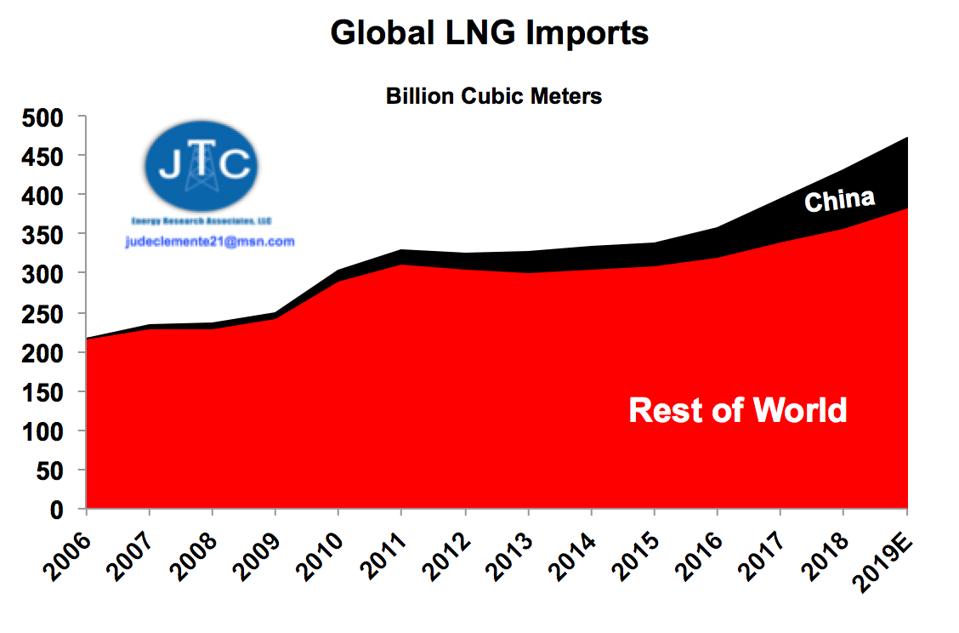 
China imported more LNG than Japan in November and December 2019

According to Reuters, data from Refinitiv Eikon shows that China imported a record high monthly volume of LNG in December 2019, overtaking Japan as the world’s top LNG importer for the second month in a row.

The data shows that, whilst China only marginally surpassed Japan in terms of LNG imports in November (the first time it has done so), it exceeded Japan’s LNG imports by a significant amount the following month.

According to Reuters, analysts have said that China’s position above Japan will not last beyond winter.
......... 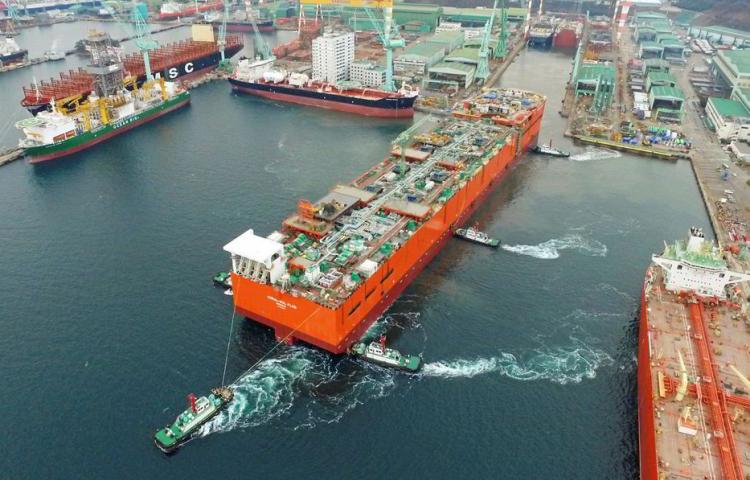 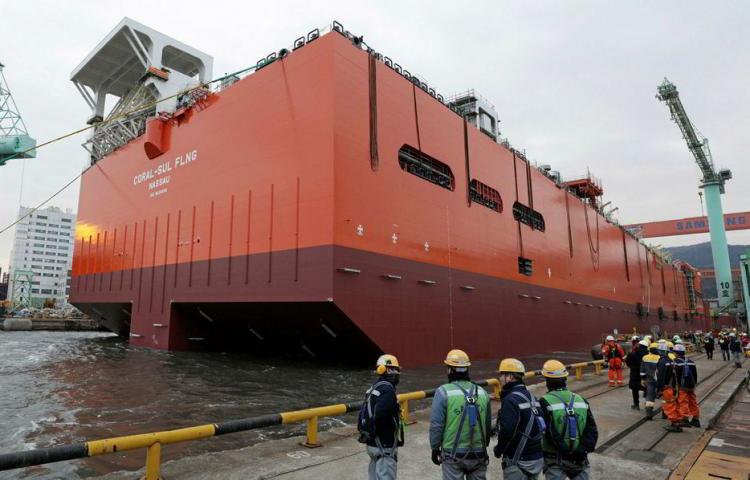 LNG prices have already plunged to their lowest levels in a decade in Asia as the ramp up of supply in 2019 came at a time when demand has slowed. That was true before the outbreak of the coronavirus. But the quarantine of around 50 million people and the shutdown of huge swathes of the Chinese economy has sent shockwaves through commodity markets.

Shipments of oil and gas are backing up at Chinese ports, which is creating ripple effects across the world. Now, Chinese state-owned CNOOC is considering declaring force majeure on its LNG import commitments, according to the FT. Sinopec and CNPC are also apparently considering the move.

Prices were already in the dumps. JKM prices recently fell to 10-year lows. But they have continued to decline, approaching $3/MMBtu for the first time in history. Just a few weeks ago, JKM prices were trading at around $5/MMBtu, itself an incredibly low price for this time of year.

LNG exports from the U.S. are uneconomical at these price levels. Many exporters have contracts at fixed, higher prices. But shipments can be cancelled for a fee. And any spot trade would be hit hard. The question now is whether shipments will come to halt. “Forward prices for summer are now at levels where U.S. LNG shut-ins begin to seem viable,” Edmund Siau, a Singapore-based analyst with energy consultant FGE, told Bloomberg. “There is usually a lead time before a cargo can be canceled, and we expect actual supply curtailments to start happening in summer.”

But if buyers start cancelling their purchases, LNG exporters have to ramp down production. That could then ripple back to the shale gas fields in the U.S., where prices are already below $2/MMBtu and drillers can’t make any money. The CEO of Marcellus shale gas giant EQT said in December that “a lot of this development doesn’t work as well at $2.50 gas.” Henry Hub prices are now below $1.85/MMBtu.

There is little relief in sight. “Even with our projected increase in power sector natural gas demand due to the current low price environment, we estimate natural gas stocks to end this summer with 3.85 tcf in the ground,” Bank of America Merrill Lynch said in a recent note. “Such inventory level would be more than 100 bcf higher YoY, and does not leave much room for bearish errors from mild weather, high renewable generation, or reduced LNG exports.”

But that is not happening. Europe just saw its warmest January on record, depressing gas demand. Fossil fuels are driving climate change, so it’s rather ironic that higher temperatures are now battering gas markets.

It’s all combining to create a “gasmaggedon,” according to Bank of America Merrill Lynch.

“We are now more than halfway through the winter, and thus far Mother Nature has not been kind to natural gas prices,” analysts at the bank wrote.

The investment bank calls the U.S. Midwest power sector is the “true market of last resort,” which means that U.S. gas prices have to fall to such low depths that coal-fired power plants are forced offline in their last redoubt – the Midwest.


......
The problem is that the European LNG market is already oversupplied. Last year, the Gate Terminal in the Netherlands, which takes in a lot of the LNG coming into the continent, said it processed a record 171 LNG carriers in 2019. It seems a lot of the LNG remained in storage, sparking concern that soon Europe will not be able to handle the unwanted LNG of Asia, not least because of unseasonably warm weather that has pressured already lackluster demand further.

This state of LNG fundamentals has already driven prices low. The November and December spot price for LNG in the Netherlands averaged some $3.95 per million British thermal units. It was the lowest for this time of the year since January 2004, Reuters noted in a report. But as the glut deepens, traders expect prices to fall further, to $2.4 per mmBtu later this year.

“There is less room to inject gas in storage this summer and a lot of coal to gas switching has already taken place,” an Energy Aspects analyst told Reuters..
.......

Back in October 2017, the Kamchatka government and PJSC Novatek signed an agreement aimed at developing a sea terminal on the southeast coast of the Kamchatka Peninsula.

The terminal is intended for the transshipment of liquefied natural gas delivered from the Yamal Peninsula by ice-class gas carriers and transferred to ordinary gas carriers for further gas transportation to the Asia-Pacific region.

According to Glavgosexpertiza, the project will optimize LNG supplies from the Arctic, thereby boosting the development of the Northern Sea Route and trade and economic ties of the Kamchatka Territory.

The terminal would first service 328 gas carriers annually and 657 gas carriers once it is fully operational.

2019 was a record-shattering year for the liquified natural gas (LNG) industry, says a new report by IHS Markit, (NYSE: INFO), a world leader in critical information, analytics and solutions. The report, entitled 2019: A Year of Records for LNG says that the numerous records are indicative of a sustained growth trend, with global LNG capacity expected to increase by more than 50%—from 283 million metric tonne per annum (MMtpa) in 2015 to 437 MMtpa in 2020.

“The ongoing pace of new investment is especially noteworthy considering a market context of weak global prices,” said Michael Stoppard, chief strategist, global gas at IHS Markit. “Not only did LNG grow at an unprecedented rate in 2019, but the industry also laid the foundations for continued strong growth into the middle of the decade.”

Key records set by the LNG industry in 2019 were:

Record levels of new investment.
Final investment decisions (FIDs) for liquefaction projects were made at an extraordinary level of 70.4 million tons per year (MMtpa)—40% higher than the previous all-time high reached in 2005 (50.4 MMtpa). The United States, Russia, and Mozambique each set individual highs for levels of annual FIDs.

Record levels of FIDs without long-term contracts.
Some liquefaction FIDs were made either without long-term contracts or were underpinned by sales to affiliates. Such “affiliate marketing” reached a record 43 MMtpa. Affiliate marketing at this scale has not been common in the LNG industry. Historically, most projects have instead secured long-term offtake contracts prior to committing to investment. By choosing to proceed without third-party contracts, projects can be developed more rapidly.

Record liquefaction project start-ups.
New liquefaction start-ups amounted to 38.8 MMtpa of capacity, narrowly surpassing the previous high set in 2009. Recent start-ups were concentrated in the United States, Australia and Russia. The pace of project starts is expected to slow in 2020 to 28.6 MMtpa of capacity. The United States will continue to dominate in this area as it mostly completes its current wave of projects.

New global supply leader.
Australia surpassed Qatar as the top LNG exporter for 2019, reaching 80.2 MMt relative to 72.5 MMt in 2018. Australia is expected to extend its lead in 2020 and retain its position as top exporter until 2023 when the United States is projected to become the largest LNG producer.

Record European imports.
Europe set records for imports each single month as well as for the year as whole. Annual net imports totaled 87.2 MM tons which exceeded the previous record of 65.5 MM tons set in 2011. Imports are expected to remain strong in 2020 due to additional new liquefaction supply coming to market. New supply in 2020 is expected to outpace Asian demand growth and therefore maintain sales into Europe.

Record Chinese imports.
China overtook Japan as the world largest LNG importer in the month of December 2019, with volumes for the month reaching 7.3 MMt, compared to Japan’s 6.9 MMt. Even though Japan is expected to continue to be the world’s largest LNG importer on a total annual basis through 2022, 2019 marked the second year in a row of declining imports for the country, continuing an overall downward trend since 2015. China entered its fourth year in a row of record LNG imports, increasing its LNG imports 13.4% on a year-over-year basis.