Israel’s biggest natural gas field, Leviathan, is set to begin gas supply to the local market within three weeks and start exports to Egypt and Jordan shortly after that, in a major milestone for the energy landscape in Israel and the Eastern Mediterranean.

“Within two to three weeks we will open the wells and start to supply the gas,” Binyamin Zomer, VP for Regional Affairs at Leviathan’s operator, U.S. Noble Energy, said at a conference on Monday, as carried by The Times of Israel.

According to Noble Energy’s executive, Leviathan will begin gas supply to the Israeli market by the end of this year, while exports to Egypt and Jordan will start early in 2020.

Leviathan—discovered in 2010—together with other fields discovered offshore Israel in the past decade such as Tamar, Karish, and Tanin, is expected to help Israel become energy independent.

Israel is set to soon begin natural gas exports to Egypt. The two countries, which mark this year 40 years since signing a peace treaty in 1979, have made meaningful advances in their natural gas industries in recent years and are competing to become Eastern Mediterranean’s next energy hub.

The deal under which Israel will export natural gas to Egypt has been described by Israeli officials as one of the most important bilateral agreements since the two countries made peace 40 years ago.

At the beginning of last year, Israel’s Delek Group and Houston-based Noble Energy—the main partners in the Tamar and Leviathan gas fields offshore Israel—signed agreements to sell significant quantities of natural gas from the two fields to Dolphinus Holdings to supply gas in Egypt.

Gas began flowing from the mammoth Leviathan offshore natural gas field on Tuesday, after the government gave a final go-ahead to Noble Energy to forge ahead with the project despite vocal protests from residents of the coastal region who are concerned about the pollution emitted by the rigs.

The Environmental Protection Ministry said Monday that Noble Energy and its partners had met all the necessary conditions to begin pumping gas, paving the way for the rigs to begin extracting the estimated 22 trillion cubic feet of gas trapped underground.

Early Tuesday morning Noble began a gas rig test that is necessary ahead of starting operations, and later that morning the partners in Leviathan announced the start of natural gas production from the reservoir, the largest energy project in Israel’s history.

The first gas will reach Israel’s shores via the pipes within 24 to 48 hours from the start of production, the companies estimated. 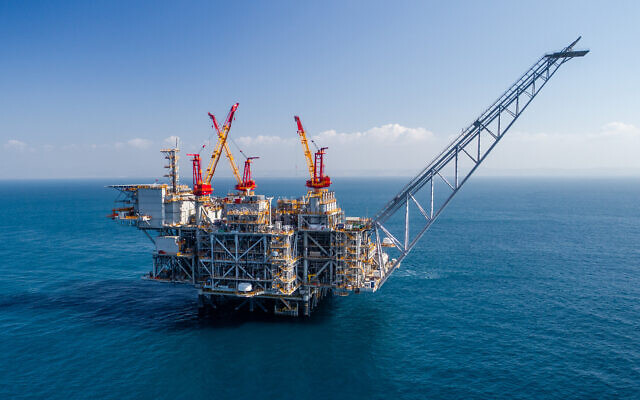 The start of the gas “marks a historic turning point in the history of Israeli economy,” said Yossi Abu, the CEO of Delek Drilling LP, one of the partners in the field. “For the first time since its establishment, Israel is now an energy powerhouse, able to supply all its energy needs and gaining energy independence. At the same time, we will be exporting natural gas to Israel’s neighbors, thus strengthening Israel’s position in the region. Leviathan project will bring the coal era in Israel to an end, and will supply efficient, inexpensive and clean energy to people in Israel and in the Middle East.”

Gas from the Leviathan field will be transferred via two subsea pipelines, 120 kilometers in length, to the processing platform, which lies 10 kilometers west of the coastline. Gas processing will take place entirely offshore, and the processed gas and stabilized condensate will be transferred from the platform to the shore via two separate pipelines that will be connected to the national gas transmission system, and to the national fuel transmission pipeline, the partners said in a statement Tuesday.

A gas rig test planned for last week was scratched at the last minute because of concerns that the company had failed to meet the necessary criteria for the procedure. However, on Friday, the Environmental Protection Ministry gave the green-light for the test early Tuesday, paving the way for turning on the spigots.

In the test, workers flushed out the nitrogen currently filling the rig’s pipes. Environmental groups argued that the chemicals involved could have carcinogenic effects and many residents along the coast have expressed concerns over the release of potential pollutants.
........

Located in the Mediterranean Sea 125 kilometers (77 miles) west of Haifa, the Leviathan field holds some 22 trillion cubic feet of recoverable natural gas, and a potential half a million barrels of oil, according to estimates provided by the partners in the field. The platform’s upper level stands 47 meters above the sea level (154.2 feet).

The gas supply will help phase out expensive and more-polluting imported coal, and allow for gas exports. This will lower energy costs, making Israeli industries more competitive, and bring in revenue from the sale of gas to neighboring countries, boosting the country’s current account, an important indicator of economic health, economists say.

Houston-based Noble Energy Inc. and its partners in Leviathan — including Delek Drilling, a unit of the Delek Group Ltd., and Ratio Oil Exploration 1992 LP — discovered the field, one of the largest deep-water natural gas finds in the world, in 2010. The project is the largest funded by private capital in Israel’s history.

Noble and its partners have invested $3.6 billion to date in the first stage of development of the reservoir, the companies said Tuesday, $150 million less than projected in the project’s original budget. The nearby Tamar field — Israel’s second-largest find, also owned by Noble, Delek and Israeli firm Isramco Negev 2, LP — started producing gas in 2013 and has been supplying the country. It holds some 10 trillion cubic feet (tcf) of natural gas, half of the amount held in Leviathan.

The two fields, along with the smaller Karish and Tanin fields that are set to start production in 2021, are seen as a bonanza for a nation that has traditionally been starved of natural resources. They also provide a stable source of locally produced energy from four different fields, leading to a more secure supply that is enough to feed all of Israel’s electricity needs for decades.

The Leviathan partners have signed two significant export contracts, with Egypt and Jordan, which are seen to help strengthen ties with the two neighboring countries with which Israel has peace agreements.

Israel has been exporting gas from the Tamar field to Jordan since January 2017, but the Leviathan deals are considered to be bigger and more significant for the economy.

Israel ordered on Thursday natural gas production at the huge offshore Leviathan field be reduced by around 40 percent after a fault was detected in a subsea pipeline leading to the wells, the energy ministry said.

There wasn’t any damage to the platform and associated facilities, nor any leak into the sea, the ministry added, as carried by the Jerusalem Post.

After the fault was discovered, the energy ministry told the operator of the platform, U.S.-based Noble Energy, to cut the volumes of natural gas production by 40 percent.
......

Shortly after the announcement, Chevron President of Middle East and North Africa operations Clay Neff contacted Israel's Energy Minister Yuval Steinitz, briefing him that the deal had been finalized.

Steinitz hailed the announcement as tremendous news for Israel’s economy and for its energy industry, saying, "I spoke today with Clay Neff who is responsible for Chevron's operations in the Middle East and he informed me that the merger with Noble Energy had been completed. The entry of an international oil major is huge news for the Israeli economy and opens up opportunities for investment in the high-tech sector and startups in the field of energy."

Noble Energy held 25% of the Tamar field and 40% of Leviathan. These stakes in the Israeli fields were reportedly a key element of the deal with Chevron. According to estimates, the Tamar and Leviathan fields, discovered in 2009 and 2010, respectively, collectively hold some 26 trillion cubic feet of natural gas. Once developed, these fields could satisfy Israel’s internal electricity needs for the next three decades. They could even turn Israel into a regional natural gas exporter.

A report published at the end of August revealed that in the first half of 2020 Israel gained in royalties paid by companies extracting natural resources about 480 million Israeli shekels ($141 million). This constituted an increase of almost 13% compared to the same period last year. Almost all of the royalties came from the natural gas fields Tamar and Leviathan.

Natural gas started flowing from the Tamar field some seven years ago. At the larger Leviathan field, gas started flowing by the end of 2019. Shortly after, in January this year, Israel and Egypt announced the implementation of a $19.5 billion deal to pump natural gas from both fields. Energy ministries in Cairo and in Jerusalem issued a joint statement, qualifying this as “an important development that will serve the economic interests of both sides."