Shell, Innogy and Stiesdal Offshore Technologies (SOT) will invest £18 million in the development of a new floating wind test turbine.

The three firms yesterday signed an investment and cooperation agreement where they committed to used a SOT TetraSpar floating foundation concept.

Hans Bünting, COO Renewables of innogy SE, said: “These are exciting times. The floating offshore wind market is evolving but until now, floating foundations have been stubbornly expensive. 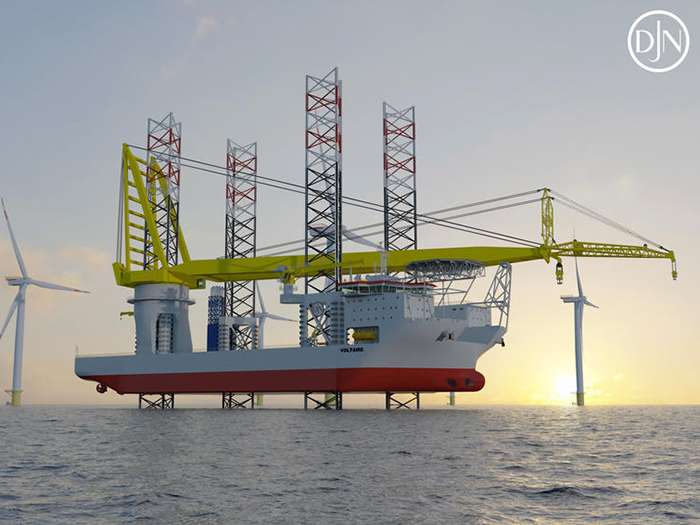 Offshore wind turbines are getting larger, with units under development with heights of more than 270 m and blades 120 m long. These increases in size and installation height create problems for currently available installation vessels.

In response, Belgium based Jan De Nul Group has ordered its third, and largest, offshore jack-up installation vessel, the Voltaire, at the COSCO Shipping Heavy Industry shipyard in China.

Key features include a main crane of over 3,000 tonnes, an operating depth of approximately 80 meters, a payload of about 14,000 tonnes and accommodations for 100 persons. The vessel has four legs to lift itself above the sea level for stable working conditions and is equipped with a DP2 system.

The vessel was designed by Jan De Nul while Danish based naval architectural firm Knud E. Hansen provided design review and contributed to the tender design package. Based on experience from designing the wind turbine installation vessels Pacific Orca and Pacific Osprey for Swire Blue Ocean, Knud E. Hansen provided the midship section and design of the three‐chorded truss work legs, the jacking frames, the leg wells and the main crane pedestal as well as global and local FEM strength calculations of the hull, the legs and the jacking frames. 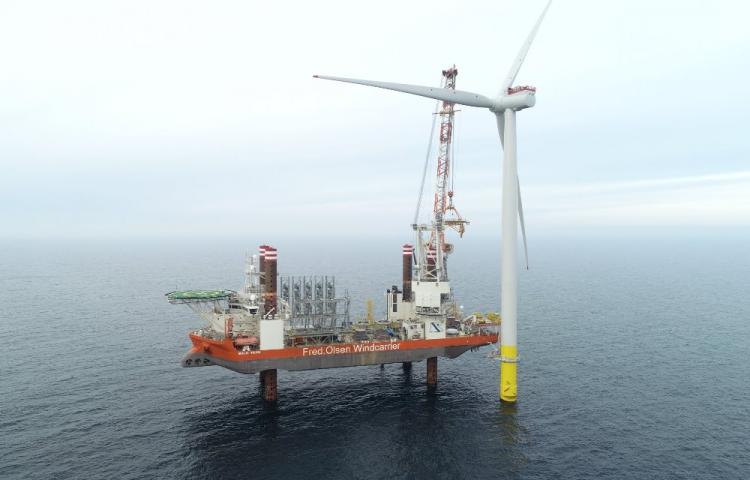 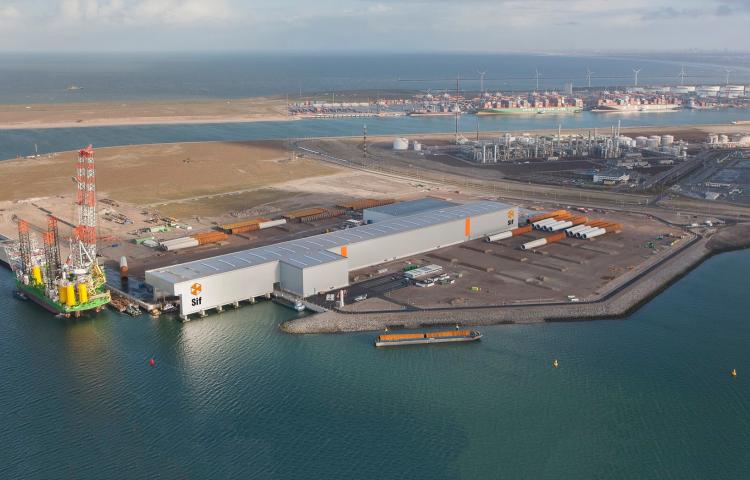 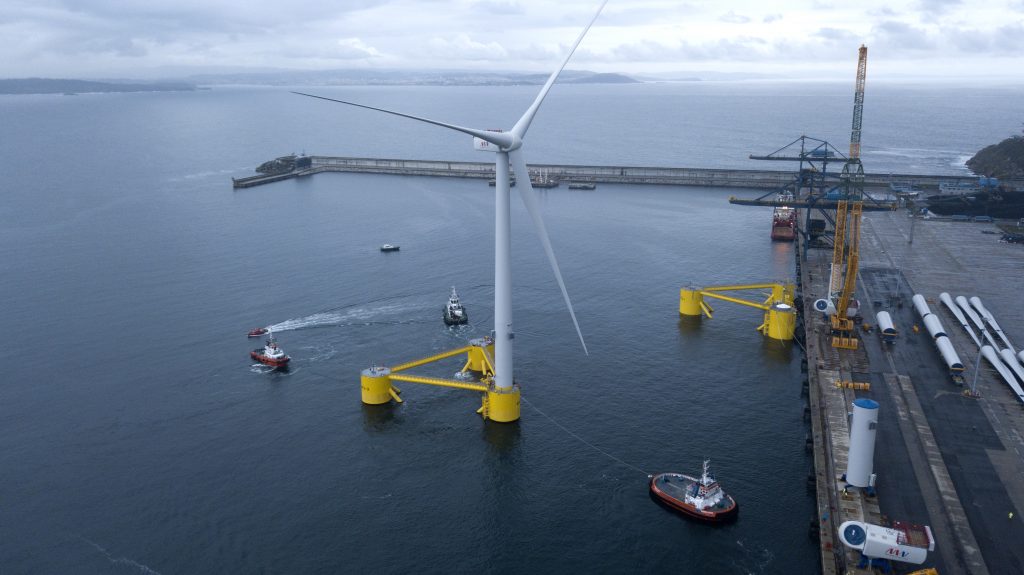 First wind turbine departs from the Port of Ferrol, Spain, towards Viana do Castelo in Portugal. [Windplus]


The first turbine from the WindFloat Atlantic project was successfully towed from Ferrol, Spain, towards its destination 20 km off the coast of Viana do Castelo in Portugal on Saturday (19 October), in what constitutes a world second for floating wind.

That first turbine will be joined in the coming months by two more floating units, which by the end of the year will produce 25 MW of electricity, enough to cover the energy needs of 60,000 homes, said the promoters of the project, an international consortium.

This is the second floating wind farm in Europe and the world after the Hywind project was inaugurated off the coast of Scotland in October 2017.

The project uses WindFloat technology, which enables platforms to be installed in deep waters, inaccessible to date, where abundant wind resources can be harnessed.

The project is led by the Windplus consortium, comprising Portugal’s EDP Renewables (54.4%), France’s ENGIE (25%), Spain’s Repsol (19.4%) and US-based Principle Power Inc. (1.2%). The government of Portugal, the European Commission and the European Investment Bank all provided financial support, with the EIB acting as the lead bank.

“This is the first floating wind farm which is bank financed,” said João Metelo, the CEO of Principle Power, adding Windplus was the first of its kind to be fully developed as a commercial project. “It really proves the ability to finance floating wind, which until now wasn’t the case,” Metelo told EURACTIV.

“It’s great to see a second project going ahead,” said Giles Dickson, CEO of trade association WindEurope. “Floating offshore wind now stands at the cusp of large-scale commercialisation. With the right policy measures, it could really take off over the next five to ten years,” he told EURACTIV in emailed comments.

Offshore wind is expected to play a big role in reaching the EU’s climate and renewable energy targets. Industry sources say floating wind turbines will allow for the true globalisation of offshore wind because platforms can be installed further away at sea in places that were previously inaccessible.

“We see traditional ‘bottom-fixed’ wind farms generally currently being built in Europe up to a maximum sea bed depth of 50-55 metres,” said WindEurope’s Andrew Canning. “So floating is interesting because there aren’t the same water depth constraints,” he told EURACTIV.

And the potential is vast. WindEurope expects around 350 MW of floating offshore wind to be switched on in Europe by 2021 and a further 4-5 GW by 2030. Technically, Europe’s potential reaches about 4,000 GW, Canning pointed out.

Technology-wise, the Windplus project is the first to rely on a semi-submersible platform, which Metelo said will allow further commercial deployment of offshore wind across the world because it is cheaper and more flexible than technology used until now. Installations can be built onshore and then towed out to sea without relying on heavy-lift vessels which entail higher costs, he explained.

With the technology maturing, costs are expected to go down rapidly. Today, the cost of floating wind hovers around €180-200 per MWh. But with large scale commercialisation, it could fall even faster than for traditional ‘bottom-fixed’ offshore wind turbines, to reach €40-60/MWh by 2030, Dickson said.

“We’ve seen with bottom-fixed offshore wind how quickly costs can come down. The same could happen with floating,” he told EURACTIV.

“To make his happen, countries should learn from Hywind and WindFloat and include floating offshore wind in their National Energy and Climate Plans for 2030. And they should run floating-specific auctions to deliver these volumes,” Dickson said.

WindFloat has three additional floating wind farms currently in the pipeline, Metelo said: a 25 MW project in Portugal due to be completed in 2019, a 50 MW project in Scotland, due in 2020, and a last one in the Golfe du Lion, Southern France, which is due in 2021.