Poseidon Nickel Ltd, buoyed by a recent surge in nickel prices, said on Friday it would restart operations at its Black Swan project in Western Australia.

Prices of Nickel surged this week after Indonesia, the world’s biggest nickel ore producer, said it would stop exports from the start of next year, two years earlier than it initially indicated.

The “improved market dynamics” provided a price foundation to support a restart of the Black Swan operations, Poseidon said in a statement.

The nickel-focused miner, backed by billionaire Andrew Forrest, said the restart would take several months and may cost A$2.9 million ($2 million).

“We are now entering an important and critical time for Poseidon aided with tailwinds from improving, sustained increased nickel prices,” said David Riekie, who was appointed interim chief executive officer on Monday.

Goldman Sachs said in a note on Sunday it expected London nickel prices to reach $20,000 per tonne in three months due to the ban. Prices currently sit at $17,500.


.....
Indonesia expects the export ban to lure about $20 billlion in fresh investment into nickel and related projects by 2024. Several overseas firms are planning battery-grade nickel facilities in Indonesia, including China’s Tsingshan Holding Group Co. and PT Vale Indonesia, a unit of the Brazilian mining giant. Investments have totaled about $9 billion so far, Pandjaitan said.

Indonesia last month jolted the metals market by expediting a ban on nickel ore exports by two years to force miners to build smelters to locally process the ore used in stainless steel and lithium-ion battery.
.......

Vancouver-based Sienna Resources (TSXV: SIE) has begun drilling at its flagship Slättberg nickel-copper-cobalt project in Sweden. The company announced Friday that Arctic Drilling AS of Norway has been selected as the contracted driller to lead this multi-hole drill program.

“It has been well over a year since our last drill program and drill results are what the market wants to see. The work programs over the past few years have enabled us to razor focus the drill program into the most highly prospective locations for nickel,” Sienna Resources president Jason Gigliotti commented.

He also noted that the strong nickel price had made it an opportune time to start drilling for the battery metal.

Data gathered from the 2018 drill program, in addition to downhole electromagnetic surveys and modern sampling and geophysical work, had provided multiple new high-priority drill targets. The 2019 work program is fully funded by cash on hand, says the company.

The project contains drill-defined massive sulphide mineralization that extends to about 100 m in depth, and remains open for expansion at depth and along strike. It is accessible year round, with nearby rail, power and five smelters in the Nordic region. At least 16 historical mines are located on the property, with operations dating back to the late 1800s.

Sienna Resources’ stock surged by over 22% on Friday morning. The company’s market capitalization is C$3.1 million. 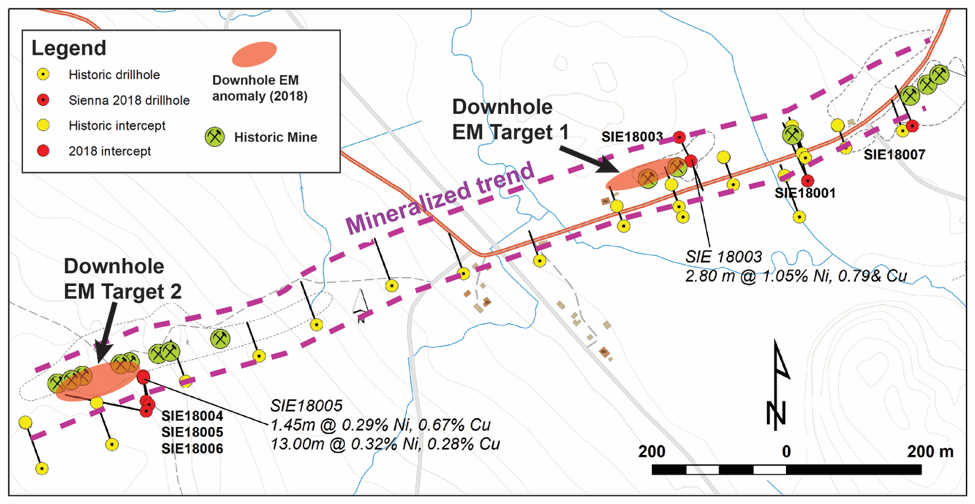 The scope of work comprises open pit mining services including drilling and blasting, and loading and hauling.

The companies have signed the contract for an initial term of five years, propelling the contractor’s projected revenue to around $770m during the 2020 financial year.

MACA expects to begin mobilisation to site in December with operations starting in January.

MACA operations director Geoff Baker said: “We are very pleased to have been selected preferred contractor and look forward to developing a long-term working relationship with the First Quantum team at the Ravensthorpe Nickel Project.

“First Quantum have focussed on local and Aboriginal opportunities in the regions of Albany, Ravensthorpe and Esperance in order to resource the Ravensthorpe project which MACA intend to leverage from.

“This project will generate another 230 jobs bolstering the local and regional communities.”

The final contract is subject to finalisation of documentation with all major terms that have been agreed upon.

The Dumont deposit, located near the town of Amos in the Abitibi mining camp of Québec, would be “one of the largest base metal mines in Canada and one of the top five sulphide nickel producers globally once in production,” said RNC Minerals CEO Mark Selby in a media release.

Selby added that Dumont will be “one of the only large scale fully permitted nickel-cobalt projects” that could satisfy the significant growth in battery metal demand by the electric vehicle sector.

Based on the technical report, previously released on May 30, the project contains the second largest nickel reserve in the world, at 2.8 million tonnes (6.1 billion pounds) of contained nickel, and the ninth largest cobalt reserve with 110,000 tonnes (243 million pounds) of contained cobalt. The study estimates an after-tax net present value (NPV) of $920 million and 15.4% after-tax internal rate of return (IRR).

In addition to Dumont, RNC is also advancing its 100% owned Beta Hunt gold mine located in Western Australia. Last month, the company announced that it had substantially boosted the mineral resource on the Western Flanks zone of the mine, highlighted by a nearly five-fold increase in the measured and indicated category.

The future of nickel: tensions, trade bans and technology

It’s an interesting time for nickel on the global markets. Prices have risen dramatically despite trade tensions between the US and China, and are expected to explode as Indonesia and the Philippines prepare for nickel export bans. We assess the market dynamics of this important metal.

With increased demand for stainless steel production and recent developments in technologies such as electric vehicles, demand for nickel is higher than ever. Unfortunately, this demand is struggling against an increasingly tightening supply of the essential metal.

In response to the risk of this increasing demand tightening local supply, the Indonesian government announced in September 2019 a ban on the export of raw nickel ores, bringing the ban forward from 2022 to January 2020.

According to GlobalData analyst David Kurtz, this ban is intended to produce value-added nickel products, stimulate domestic processing of ore, and make the country a hub for electric vehicle production.

Indonesia is the largest global producer of nickel and a major supplier of the metal to China’s stainless steel industry; in anticipation of the ban, Chinese producers are building up nickel inventories.

This has increased the price of nickel significantly, with prices at the end of September 2019 reaching more than $16,000 per tonne, an increase of more than 60% from January. When the ban was announced, nickel prices increased by 8.8% to reach a peak of $18,620 per tonne, the highest price since 2014.

While over half of Indonesia’s nickel is processed in the country, around 218,000 tonnes of the metal is unprocessed and would be affected by the ban, which represents around 10% of global demand.

Concerns over supply have led to LME nickel warehouse stock levels dropping by almost 50% since the announcement of the ban, with Reuters reporting that stocks have fallen to 79,800 tonnes, the lowest since January 2009, as of 24 October 2019.

Potential for the Philippines?

The mining sector in the Philippines is expected to benefit from the supply gap created by this export ban, with the country’s nickel industry having suffered in recent years.

As the second-largest producer of nickel, the Philippines accounted for nearly 16% of global production in 2018.

Since the shutdowns, output has steadily increased but has become dependent on a smaller number of operations, particularly in the mining region of Caraga. According to Kurtz, the ban in Indonesia “paves the way for higher exports of nickel from the Philippines to China.”

With China being a significant importer of nickel, particularly for its stainless steel production, the ongoing trade dispute between the US and China has had a considerable influence on nickel prices.

Prior to the announcement of Indonesia’s export ban, nickel prices fell steeply in the second half of 2018, but has eased in anticipation of trade talks later in 2019. Indonesia’s export ban has also allowed the price of nickel to fare better than other metals such as copper, avoiding the longer-term financial concerns seen across the resources sector.

Primary nickel production is forecast to rise by 9-10% in 2019 to reach 2.4MT, primarily driven by an increase in Indonesia from rising production in new mines. Demand for nickel in China is expected to grow over 2.1Mt, as opposed to the 1.6Mt estimated for 2019.

With the export bans in place, nickel prices are expected to remain high while stocks remain low. However, any escalation of the trade tensions between the US and China could lead to a fall in prices, and there remains the possibility of Indonesia relaxing their export ban (as it did previously in 2017 for a ban established in 2014).

This reversal applied to operators working on building processing capacity, and came about due to losses incurred by stated-owned nickel exporter PT Aneka Tambang as well as a need to ease the country’s budget deficit.

FPX Nickel has released the results of pressure leaching testwork on nickel concentrates from its 245-sq.-km Decar nickel project located in central British Columbia. Based on nickel recoveries in excess of 98%, the company believes that the resulting solution could be an ideal feed for the production of nickel sulphate and cobalt sulphate through neutralization and solvent extraction.

These sulphate products are used in the manufacturing of electric vehicle batteries.

“These results confirm a breakthrough for FPX Nickel, demonstrating that Decar has the potential to produce significant quantities of nickel and cobalt in a high-quality form for the fast-growing EV [electric vehicle] supply chain,” Martin Turenne, FPX president and CEO said in a media release. “This testing confirms the potential for the production of nickel sulphate and cobalt sulphate from awaruite ore in a simple three-stage process.”

........
Two of the plants, representing a combined investment of $2.3 billion, are expected to be built in Morowali by China’s Zhejiang Huayou and partners and by Chinese battery firm GEM Co Ltd, Tsingshan Holding Group and partners.

This drop will be slightly offset by the impact of rising production growth in the Philippines where some currently suspended mines will become operational again, while the country aims to plug the likely supply gap caused by the Indonesian export ban, Fitch says.