Electricity generation of Russia's nuclear power plants hit a record in 2019 to reach about 208.8 billion kilowatt-hours, up from some 204.3 billion in 2018, Russian nuclear energy company Rosenergoatom said Wednesday.

At present, the share of nuclear generation is about 19 percent of the total electricity generation in Russia, and this ratio in the European part of the country has reached 40 percent, it said.

Russian agency RIA Novosti reported that 36 industrial power units with a total installed capacity of 30.25 gigawatts are in operation at 10 nuclear power plants in the country.

Russian nuclear regulator Rostekhnadzor has extended the operating licence for unit 3 of the Beloyarsk nuclear power plant in the Sverdlovsk district by a further five years. The licence for the BN-600 fast reactor, which began operating in 1981, was due to expire this year. 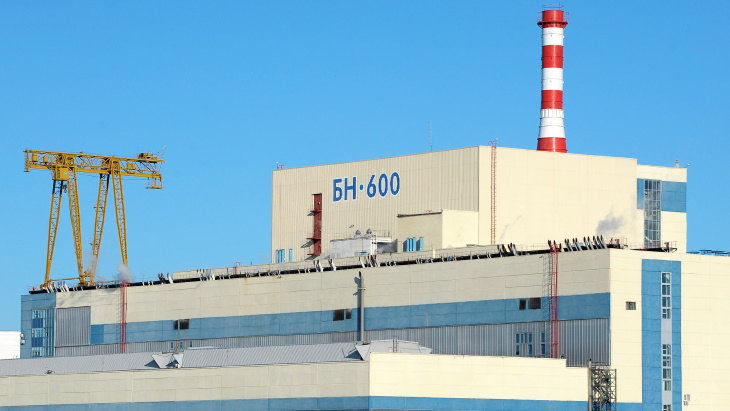 A large-scale modernisation programme has been under way at the unit since 2009, which has affected all areas of safety, operator Rosenergoatom said. This has included the installation of a second reactor emergency protection system, an emergency dampening system using an air heat exchanger and a back-up reactor control panel. In addition, a large amount of work has been carried out on the inspection and replacement of equipment, including the replacement of the unit's steam generators.

In 2010, the BN-600 was confirmed to be in compliance with the latest safety requirements and on that basis extension of the operating life was justified until 2025. However, Rostekhnadzor only extended its license for a further 10 years of operation, requesting additional justification for the operability of irreplaceable reactor components.

Investigations conducted since then by Russian nuclear engineering company OKBM Afrikantov, part of Atomenergomash, together with the Kurchatov Institute and FSUE CRI KM "Prometey" concluded that it is technically possible to continue operation of the reactor. Based on this, Rostekhnadzor has now extended the operating licence of the 560 MWe Beloyarsk 3 until 2025.

"We have completed work to extend the life of unit 3 until 2025," said Ivan Sidorov, director of the Beloyarsk plant. "In the course of our research, we proved that the technical parameters of the BN-600 allow us to operate it until 2040." He noted that JSC Atomproject is currently developing an investment project for an additional extension of the unit's operating life. This work is expected to be completed by 2024, after which Rosenergoatom will apply to Rostekhnadzor for a licence extension until 2040.

The sodium-cooled BN-series fast reactor plans are part of Rosatom's Proryv, or 'Breakthrough', project to develop fast reactors with a closed fuel cycle whose mixed oxide (MOX) fuel will be reprocessed and recycled. In addition to the BN-600 reactor, the 789 MWe BN-800 fast neutron reactor - constructed as Beloyarsk unit 4 - entered commercial operation in October 2016. This is essentially a demonstration unit for fuel and design features for the larger BN-1200 being developed by OKBM Afrikantov.

Unit 4 of the Beloyarsk nuclear power plant in Russia will be completely switched to uranium-plutonium MOX fuel in 2022, marking an important step towards closing the nuclear fuel cycle, Russia’s Rosatom has announced.

The 789 MWe BN-800 fast neutron reactor is currently fuelled by a 'hybrid core' - a mix of uranium and plutonium oxides arranged to produce new fuel material as it burns. The transition to MOX fuel assemblies will start in the first half of next year.

"The BN-800 reactor is to be switched from a hybrid core to a core with a full load of fuel assemblies with MOX fuel, which are being produced for us by the Mining and Chemical Combine in the Krasnoyarsk Territory and comprise uranium dioxide and plutonium dioxide in the form of pellets to be used as fuel," Vladimir Shaloumov, head of nuclear safety and reliability at Beloyarsk NPP, said.

"The BN-800 reactor, according to its design, is focused on the use of MOX fuel as one of the stages on domestic nuclear energy's path to the development of a closed nuclear fuel cycle," he added.

A closed nuclear fuel cycle will allow the creation of 'twin-component' nuclear energy, Rosatom said, "with simultaneous operation of fast and thermal neutron reactors". It added that this will "expand the fuel base of nuclear energy many times over, involving the uranium-238 isotope, ensuring the reuse of used nuclear fuel and minimising radioactive waste".

Russia's regulator Rostechnadzor has issued a permit for the physical start-up of Leningrad II unit 2, which completed hot tests last week. The regulator's inspection of the unit "confirmed its high degree of readiness for the start of physical launch, during which nuclear fuel will be loaded into the reactor core for the first time", state nuclear corporation Rosatom said today.
......

Unit 2 of the Leningrad II nuclear power plant in Sosnovy Bor, in Western Russia, was connected to the national grid today for the first time. Following this trial operation, the unit will be shut down for an additional equipment inspection by a state commission, Rosatom said, before being put into commercial operation, which is scheduled for 2021. The new unit will replace Leningrad unit 2, which is an RBMK-1000 reactor.

The Leningrad 2 nuclear power unit in in Sosnovy Bor in Western Russia was shut down permanently today. The RBMK, which has been in operation for 45 years, is to be replaced by Leningrad II-2, a VVER-1200, which on 6 November received regulatory approval to start pilot operation.

Russian state nuclear corporation Rosatom said Leningrad 2 was shut down for subsequent decommissioning at 12:31am Moscow time. The reactor was shut down in accordance with the technological regulations and disconnected from the unified power system of Russia without incident, Rosatom said.

In accordance with federal regulations, a shutdown power unit is considered to be in operation without generation until the moment of complete removal of nuclear fuel, which is completed within four years, Rosatom said.

"As in the case of power unit 1, which was shut down in December 2018, regular operations will be carried out with the second unit. In fact, the procedures performed practically do not differ from ordinary maintenance," Vladimir Pereguda, director of Leningrad NPP said. "Now our task is also to service reliably and safely the shutdown units, unload nuclear fuel from the reactors and prepare them for transfer to the specially created enterprise Experimental Demonstration Engineering Centre."

Noting the start-up of Leningrad II-2, Andrey Petrov, the general director of Rosatom's operator subsidiary Rosenergoatom, said: "The replacement of the retired capacities will be imperceptible to electricity consumers."

Compared to RBMK power units, the new VVER-1200 power units that are being commissioned have a number of advantages, Rosatom said. They are 20% more powerful, and the service life of their irreplaceable equipment is doubled, to up to 60 years.


Rosatom to build plant running on small modular reactors in eastern Siberia
Rosatom, Russia’s state nuclear corporation, will this month begin work at the future site of a small-scale nuclear power plant in the far eastern Siberian territory of Yakutia, Alexei Likhachev, the company’s head, said in a video message in late December.

Rosatom, Russia’s state nuclear corporation, will this month begin work at the future site of a small-scale nuclear power plant in the far eastern Siberian territory of Yakutia, Alexei Likhachev, the company’s head, said in a video message in late December.

Rosatom reports it has reached an agreement with Yakutia’s regional government laying out parameters for pricing energy that will be produced by the nuclear plant, which is expected to be completed by 2028 in Yakutia’s Ust-Yansky district.
...........
The backbone of the Yakutia plant, according to materials released by Rosatom, will be the RITM-200 reactor, a 50-megawatt unit that Russia is debuting on its most recent line of new-generation nuclear icebreakers. One has already gone into service aboard the Arktika nuclear icebreaker, the lead vessel in the 22220 Project icebreakers, four more of which are under construction at the Baltic Shipyard in St Petersburg.

Rosatom claims these reactors are an improvement on the KLT-40 reactor type, which powers the Akademik Lomonosov, and has also long been used for nautical purposes. The RITM-200s, the company says, feature compact design, modularity, a short construction period, and high safety standards, with a service life or more than 60 years. The group said the SMR nuclear plant also can produce low-carbon hydrogen, which could be used in various industries.
............

Rosatom has announced that implementation of Russian President Vladimir Putin's decision to increase the share of nuclear power in the country's energy mix to 25% by 2045 will require, according to preliminary estimates, the construction of 24 new reactor units, including in new regions.

he Russian state nuclear corporation's director general, Alexey Likhachov, made the announcement on 5 March, at Rosatom's first 'information day' this year. The text of his statement was published yesterday by the company's in-house magazine Strana Rosatom.

The 2.5GW Kursk II nuclear power plant (NPP) will replace the existing Kursk NPP in western Russia. Rosenergoatom, a subsidiary of Rosatom, is developing the project at an estimated cost of RUR225bn ($3.5bn approximately).

First concrete for the NPP was poured in April 2018, marking the start of construction of the nuclear island building foundations. The first power unit of the NPP is expected to be commissioned by the end of 2022, while the second unit is scheduled to come online in 2023.

The new VVER-TOI project, also designated as V-510, was designed by the ASE Group of Companies and the engineering division of ROSATOM as an improvement of the existing VVER-1200 reactor design.
............
The new VVER-TOI design doubles the service life of reactor equipment from 30 to 60 years, with a possibility of extending to 80 years.

Concreting of the cooling tower at the first unit of the Kursk II nuclear power plant in western Russia has started. At a height of 179 metres, the structure will be the tallest cooling tower in Russia. It is expected to be fully completed by 2024. 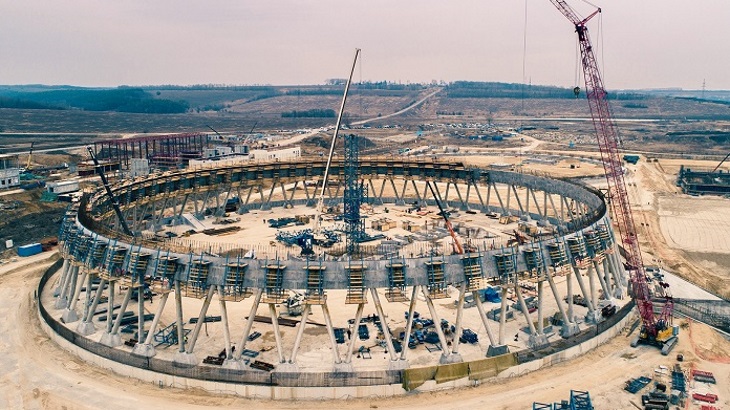 The base of the cooling tower at Kursk II-1 (Image: Rosatom)

Alexey Buldygin, head of construction for the project, said concreting of 65 of the the tower's 115 tiers will be completed by the end of this year. This will raise the structure to a height of 105m.

Work on the construction of the cooling tower began at the end of 2019. This involved the installation of 100 columns and the concreting of the supporting base.

Kursk II will be the first to use the VVER-TOI (typical optimised, with enhanced information) reactor design.

Russian nuclear fuel manufacturer TVEL has announced the start of construction of a 300 MW nuclear power unit enabled with the innovative BREST-OD-300 lead-cooled fast reactor at the site of the Siberian Chemical Combine, in Seversk. The reactor will run on mixed uranium-plutonium nitride (MNUP) fuel, specially developed for this facility as the "optimal solution" for fast reactors.
............

BREST-OD-300 reactor is expected to start operation in 2026.